I found these numbers put out by German SEO company SISTRIX of interest in regard to Google’s recent SERP algorithm change. Here are translated excerpts of the posting from Google Translate of their blog post at http://www.sistrix.de/news/985-algorithmus-nderung-google-sucht-nach-qualit-t.html. The listing is the top losers in ranking for the same word searches before and after the change.

” Two days ago, Google has a blog posting announced that an algorithm change for quality in Google’s SERPs is to provide more in the future. Sites with inferior content should be rare to find quality content for it more often. So far this change has been implemented only in the United States, other countries will follow in the future, however.

Quick would speak of an “anti-demand media” amendment, was not reliable data for this, however. I would like to change this posting: on the basis of each one million words, which were tested before and after the update in the U.S. index, I have identified the biggest losers due to the change. As the basis for this was, as usual, the visibility index SISTRIX used. Here is the table of the 25 biggest losers in absolute losses: 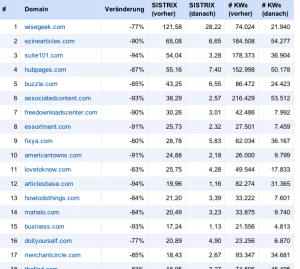 The table lists the domain, the percentage loss, visibility index before and after the update and the number of found keywords before and after the update is seen. If I had been the result with the claim that Google the fix, see, it seems to be successful: a number of projects rather flat items can now be found much less frequently. Particularly noteworthy here is certainly mahalo.com. The home of Jason Calacanis has long been under fire and attempted a few weeks ago with a relaunch of the affair drag on – apparently without success. Also Suite101.com, the Canadian mother of German SERP-Star suite101.de had to let strong springs. The consequences for the German domain name after Google rolls out the algorithm change, I can imagine now all right.”

The translation appears a little obtuse but the gist of the message comes through.